It is a well known fact that the true potential of virtual reality has not yet been realised. While the potential is something that is present, everyone is in agreement that the promise of virtual reality is enormous. In recent years, the interest in virtual reality and augmented reality has taken off especially with all the big companies trying to come up with innovative and exciting new ventures in the field of immersive technology. Facebook recently announced the production of a new head mounted display called Occulus Quest which looks to take over not only the gaming sector but all other markets as well. Facebook Spaces also allows the user to hang out with their friends in a virtual environment while providing a different kind of socializing. Microsoft Holoporation is another area that is being explored where 3D volumetric videos and images can be projected in a physical space. Intel being one of other forerunners in the field of immersive technology and virtual reality is exploring a new field in virtual reality which aims to bring live games, recaps and other exciting sports events to your doorstep. It allows users to experience the entire sports event from a different point of view and completely immersed with the help of a headset.


Intel is changing the view of sports with the help of two different technologies. The first of which is called Intel True View. This technology lets a user view every single angle of some of the best plays that are performed in sports. With the high resolution cameras surrounding the stadium and with intel’s amazing data crunching team, some of sports most coveted matchups are captured through all angles. These can then be replayed by people who can analyse games from multiple angles. Currently, this technology is mainly used to monitor matches in the La Liga, Spain’s biggest soccer league. The second technology Intel has come up with is called Intel True VR. This technology is changing the way we experience sports. Intel has made this possible for multiple avenues like NBA, MLB, NFL, NCAA and even the Pyeongchang Winter Olympics. Intel has partnered these franchises to record and take footage of games. Intel even records the pregame and postgame interviews.

One of the biggest challenges faced by many hard core sports fans is the inability to watch their favorite player or team from a close distance. This inability is due to either time constraints or the simple lack of monetary resources because courtside seats or seats close to the action is really expensive. To overcome these obstacles, Intel has come up with a beautiful concept in the form of True VR. This allows everyone from casual sports fans to hard core sports fans watch their favorite teams up close and center right from their living room.

This experience is only possible because of Intel’s state of the art cameras. Intel came up with a new conceptual device to capture 360 degree stereoscopic view. The device consists of a set of 6 high definition cameras which capture different viewpoints of the same event at the same time. These videos are stitched together to make a complete VR experience. It is hard to find out the technology behind the cameras due to confidentiality of Intel and the patents that come along with it. The actual building of the experience lies mainly in processing the videos in the servers in the backend tailored for a VR experience. 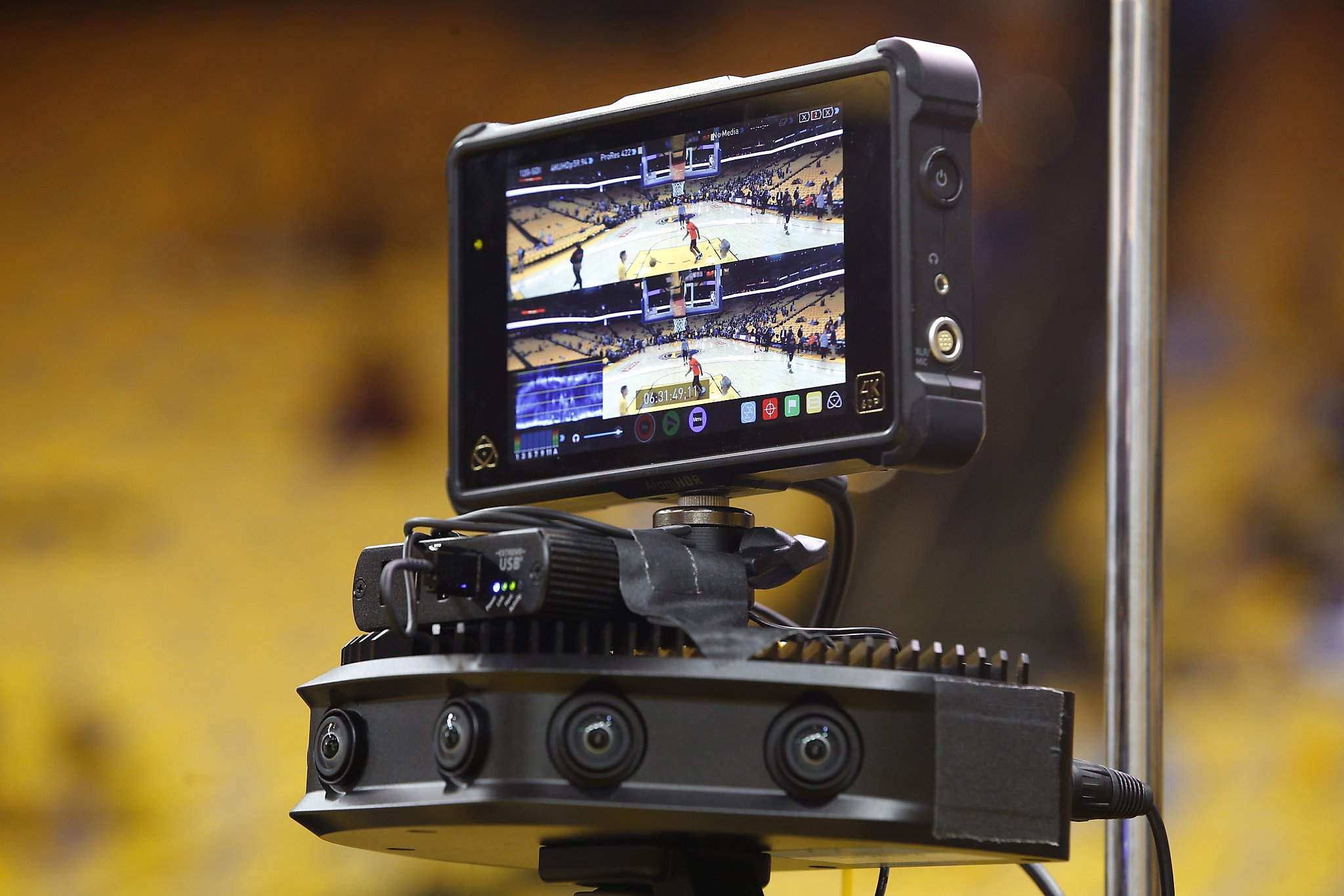 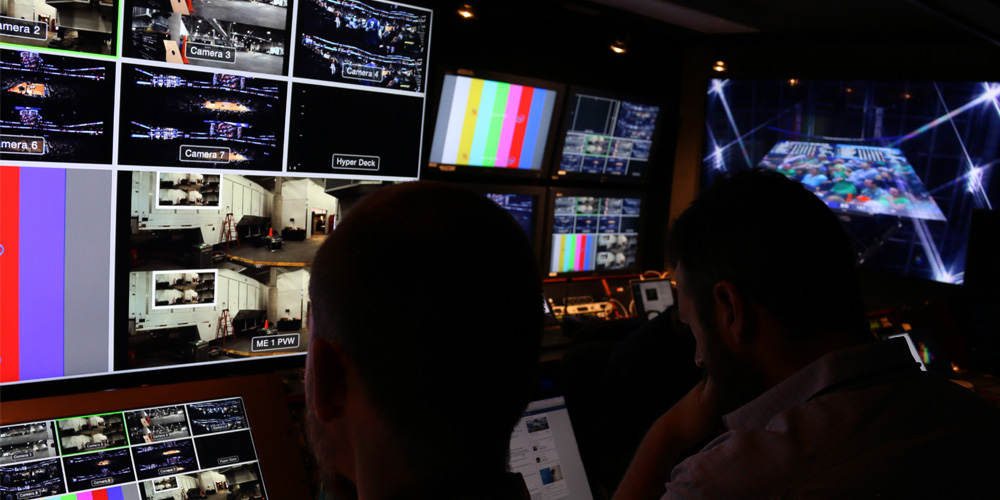 One of the toughest tasks taken up by Intel Engineers was their attempt to stream Olympic sports events in real time with on demand VR. This helped bring fans all around the world closer to the action. It was the greatest VR sports event broadcasted in the history of immersive technology. The team of engineers spent a lot of down time at the location in Pyeongchang trying to set up everything to be ready for the start of the olympics. Specifically for the Olympics, the team set up 9 different camera pods to capture the entire event. There was a huge amount of data streaming from each of these pods. Over 1 terabyte of data was flowing from each pod every single hour. These are transferred through fiber optic cable to the various servers that were set up by the Intel team.

When a viewer enter the virtual world, they will be presented with a bird’s eye view of the entire recreation of the venues. From this base camp, they can then decide where to navigate. They can move from one location to another to catch a variety of events which would have physically not been possible. While watching the actual event in virtual reality is the highlight, Intel looked beyond the scope of just recording the games. The idea behind the product is for people to access places they would normally not have authorization to access. These places included dressing rooms of players, press conference rooms and even along the teams seating area.

The virtual reality experience that is brought about by Intel is not just the 180 degree or 360 degree view of an event. It is about capturing the video from multiple points of action and letting the user select which of these options or locations they would like to view the action from. This provides a dynamic sense of interaction to the user. However, a solely video experience is not very impressive. Therefore, Intel came up with providing live statistics and scores of the event taking place. The user also has the option to view statistics of different players, their biography and other details.

How to watch it?

Intel has partnered with NBC Sports VR application to showcase the various sports events. To watch the full experience in VR, Intel has a few options to enable this. Since, most virtual reality applications are played/viewed through a headset, the options that are available are Samsung Gear VR, Google Daydream View or on the mixed reality platforms it is available on the Dell Visor, Samsung HMD Odyssey and Lenovo Explorer. The phones that are required to run such an application are mainly Samsung phones although Google Daydream also supports some Huawei models. The main objective of this entire experience was to bring the Olympics to everyone which defeats the whole purpose if it’s restricted to only expensive headsets. Therefore, even Google cardboard is supported for both iOS and Android phones.

Once all the equipment is downloaded, the steps required are:

Intel has been one of the sole big virtual reality giants who are trying to merge immersive content along with sports. Although the olympics was the largest virtual reality real time event covered in our young virtual reality lifetime, there seems to be a variety of ways that the Intel True VR experience can be improved. While the entire world is impressed with the challenge that Intel took up to stream such a big, expansive event, the end users are not concerned with the challenge of the technology. From a product, users usually expect a well tested and well rounded experience. This is one of the biggest challenges that a company faces when they want to do something new and innovative. However, this is just the beginning of the age of virtual reality and with the development of technology and the results of ongoing research on broadcasting virtual reality, the experience is bound to become fleshed out and as impressive as it was made to sound.

The review of Intel True VR from the point of end users can be divided into two different parts. Since Intel True VR is not concerned with one specific kind of sport, it reviews widely vary across the different disciplines. However, the two wide classifications are between the collection of various league sports that Intel offers as a partnership with NBC such as NBA, NFL as well as MLB and the Pyeongchang Olympics. It is interesting to see that Intel has done an excellent job when it comes to smaller scale virtual reality experiences such as the league sports. A wide variety of people from coaches, television commentators and casual fans have highly credited Intel with their attempt at bringing VR to the individuals. However, with a much larger scale experiment, namely, the Pyeongchang Olympics, Intel faced a huge amount of flak for a variety of problems that people experienced.

Intel True VR was first debuted during the March Madness Final Four in 2017. This turned out to be a huge success for Intel as they saw an unprecedented number of people who were interested in watching the entire game in virtual reality. The application received such positive reviews that Intel decided to increase the number of games that would be broadcast on VR for the 2018 NCAA March Madness due to popular demand. Subsequent to the March Madness, Intel expanded it’s horizon to NBA, NFL and other leagues. While most of the fans enjoyed the experience of being able to watch sports from up close and center, the people who were most thrilled about Intel bringing VR game experiences to professional sports were the coaches, players and analysts. According to these people, more than just the exciting venture that VR offers, it provides a huge amount of educational content for people who are really interested in the game. The ability to watch the game off the ball from different perspectives help players understand deeper natures of the game while watching film or other analysis. With the help of VR, there is huge scope for development of player, analysts and coaches alike.

Intel True VR, although it did perform exceptionally well for these smaller platforms, their attempt to cover over 30 events of the Pyeongchang Winter Olympics did not go as planned. As most people believe, the technology developed by Intel is great but it was not ready for such a big stage. They hurried up the entire development to take on something that was still a few years away. The challenges that Intel faced started with the location of the Olympics being in a destination that was not really technology friendly. With sub zero temperatures and having less than feasible signal, integrating the software was an issue that Intel faced. This led to a lot of issues with the broadcasting and streaming service. The Intel True VR cameras captured a huge amount of footage and transferred about 1TB of data per hour from each of the inbuilt cameras. Some of the issues that people had with the True VR were

It is commendable what Intel has been able to come up with for live sports. Although there are a lot of factors for improvement, it is a great start and the experience can only get better from here. With the development of technology and products that are similar to this, the merging of sports with immersive technology can only get better. It will be exciting to see what Intel will be able to come up with in the years to come in immersive technology. So far, the next steps that Intel is trying to take is to merge their Intel True VR with Intel True View to give the users a holistic view of the sport. This will be debuted next year for NCAA March Madness.